How to Play 7th Chords on the Guitar

7th Chords are essential for any guitarist learning to play jazz. While there are literally tens of thousands of possible combinations, you really only need to know 8 basic shapes to get started. In this video blog post, I’ll walk you through how to play 7th chords on the guitar as well as strategies for learning and applying them to whatever tune you might be working on.

A seventh chord is simply a 4 note chord that contains the root, 3rd, 5th and 7th scale degrees. Unlike triads, which contain 3 distinct notes and are commonly found in pop, rock, folk and country music, 7th chords – as the name implies – contain the 7th scale degree. This 4th note creates a certain flavor most commonly associated with jazz. The 7th serves to create a greater degree of tension which allows for beautiful resolutions found through out the jazz repertoire.

By altering the various tones within the chord we arrive at a variety of tonal colors:  Major 7th, Dominant 7th, Minor 7th and Minor 7th flat 5. While there are also diminished 7th and augmented chords, as well as sus chords, 9th, 11th, 13th, and a plethora of altered dominant chords, we’ll narrow our focus to these four chord qualities for now since they are the most common chord types and can usually be substituted for chords not contained in this list.

How to play on the guitar

Unlike on the piano, where 7th chords can often be played within one octave (Root, 3rd 5th 7th) in consecutive order, me must reshuffle these chords across multiple octaves in order to make them playable on the guitar. These are often referred to as open position chords. (As opposed to closed position, which occur within one octave). In technical terms these are called drop voicings. We’ll learn two groups of drop voicings today: Drop 2 voicings (who’s root occurs on the A string) and Drop 3 voicings (whose root occurs on the E string).

4 chord qualities x 2 drop voicings = 8 shapes! Once you learn these basic shapes they can be applied to any key by determining the root of the chord.

As you memorize these shapes and begin applying them to various jazz standards, you’ll notice patterns emerge. For example, it’s common to alternate from one drop voicing to the next as you move through a progression. Take the following passage from Autumn Leaves for example. 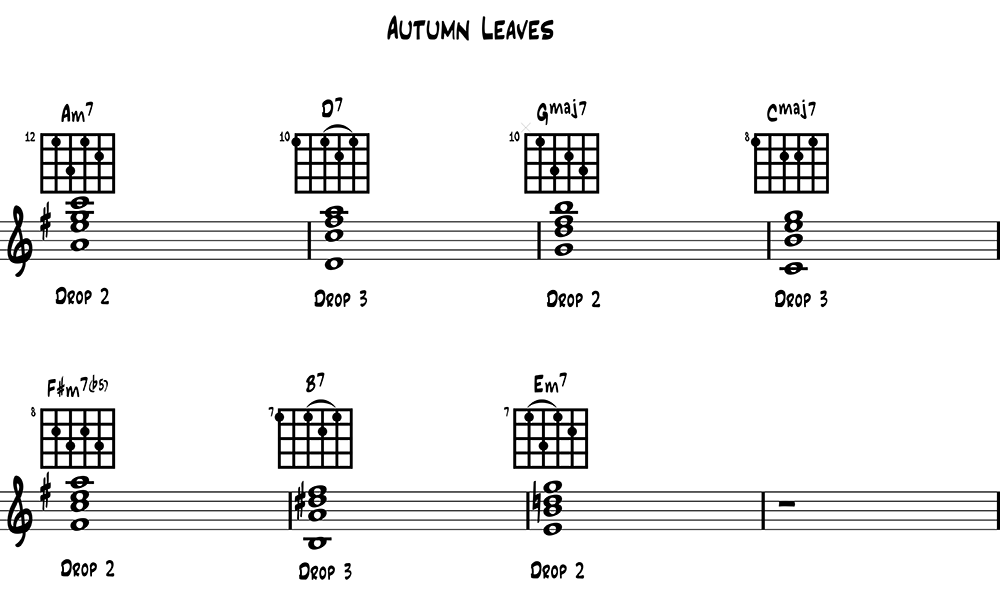 When in doubt, simplify.

Open any tune in the Real Book and you’ll find an alphabet soup of chord symbols. Don’t let that Eb7b9#11 scare you. You can always substitute a dense chord for its simpler cousin (how about just an Eb7). My advice is to start with these basic shapes in root position and learn a few tunes using only the 8 shapes discussed. Once you can play through a tune (in time) with these shapes, try adding some of the upper chord tones and alterations.

Schedule a Lesson with Alex