How to play a Pentatonic Scale on Guitar

The Pentatonic Scale is the cornerstone of playing lead guitar or “soloing”. It fits great on to the neck of the guitar and (assuming you’re in the right key), all the notes in the scale will work over any chord in the key. The name pentatonic means 5 tones or notes. There are both Major and Minor pentatonic scales. Fortunately, the shapes are the same for both! We’ll get more into the theory a little later on but for now, it’s helpful to know that most guitarists first learn to solo with a Minor Pentatonic scale. And that’s exactly what we’ll do here.

Here is a Scale Diagram for an A minor pentatonic scale. Note that the scale begins on the 5th fret of the low E string. Scale Diagrams are read down and to the left. The Open circles represent the root or first scale degree of the scale, in this case “A”. 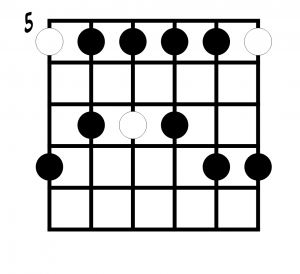 Here’s another way to visualize the scale using both guitar tab and standard notation:

How to Practice the Pentatonic Scale:

Your first goal is to memorize the scale. You’ll want to be able to play the scale both ascending and descending without having to look at the chart. Fortunately, this scale lays well on the neck. Notice that you’re always starting on the 5th fret and either moving up a minor third (three frets to 8) or a whole step (two frets to 7). Try and memorize the sequence: up 3 (minor 3rd), up 2 (whole step), up 2, up 2, up 3, up 3.

Once you have the scale memorized, try and play in time. Quarter notes at first, then eighth notes once you build confidence. Practicing with a metronome is a great idea.

Next, you’ll want to have something to play over. Backing tracks are a great place to start. A backing track is simply a rhythm track (chords, bass, drums etc) with plenty of space to play over. Play even quarter notes or eighth notes at first. Once you find the groove of the track, you’ll want to experiment with different rhythms and inflections. these can be repeated phrases, bending strings, jumping around the scale – really anything you can imagine to bring the scale to life. This step takes a lot of patience, trial and error, but will definitely pay off in the long run.

Note: The key of the minor pentatonic scale is always determined by the first note in the scale. For example, if a song is in the key of A, the scale will start on the 5th fret of the E string, (which is A). When in doubt, use your ears! In fact, this is a great way to build your ear training. Put on a favorite song and experiment with the pentatonic scale beginning on various frets. When the notes click, you’ve found your key.

As we mentioned earlier, there are 5 notes in the pentatonic Scale. Therefore there are 5 starting points or scale positions. Once you feel comfortable soloing in the first position, you’ll want to experiment moving up and down the neck. To do this, you’ll need to learn the other pentatonic scale positions:

Take your time here. The trick is to get into one position at a time and repeat the steps described for learning your pentatonic scale. Once you have some facility, try moving between two adjacent positions. Your ultimate goal is to move effortlessly both across and up and down the guitar neck!

Soloing in a Major Key

Soloing in a major key can be tricky for guitarists, but it doesn’t need to be. Once you’ve learned your minor pentatonics, you already now the major! The key here is context. Remember when we said a C major contains the same notes as A minor? Here’s the trick to soloing in a major key: Whatever the Key is, count back 3 frets and you’ve found your relative minor pentatonic. For example, if the song is in the Key of C major, count back 3 to find A minor. What is the relative minor for G major?

Playing lead guitar is a lot of fun and an endless source of creative possibilities. The pentatonic scale is a perfect way to get into soloing. It’s amazing to think that the greatest guitarists, Jimi Hendrix, Stevie Ray Vaughan, Eddie Van Halen, and yes you, are all drawing from the same well of only 5 notes to create limitless possibilities. Happy Practicing!